This report updates on what 0xB10C, Coinbase Crypto Community Fund grant recipient, has been working on over the first half of his year-long Bitcoin development grant. This specifically covers his work on Userspace, Statically Defined Tracing support for Bitcoin Core. This report was published on 0xB10Cs blog and the Coinbase blog too.

The reference implementation to the Bitcoin protocol rules, Bitcoin Core, is the most widely used software to interact with the Bitcoin network. Bitcoin Core is, however, a black box to most users. While information can be queried via the RPC interface or searched in the debug log, there is no defined interface for real-time insights into process internals. Yet, some users could benefit from more observability into their node. Hobbyists and companies running Bitcoin Core in production want to include their nodes in their real-time monitoring. Developers need visibility into test deployments to evaluate, review, debug, and benchmark changes. Researchers want to observe and analyze the behavior of nodes on the peer-to-peer network. Exchanges and other services handling large sums of bitcoin want to detect attacks and other anomalies early.

The eBPF technology present in the Linux kernel can be used for observability into userspace applications. The technology allows running a small, sandboxed program in the Linux kernel, which can hook into predefined tracepoints in running processes. Once hooked into a tracepoint, the program is executed each time the tracepoint is reached. Tracepoints can pass data, for example, application state. Tracing scripts can further process the data. The practice of hooking into tracepoints in userspace applications is known as Userspace, Statically Defined Tracing (USDT). For example, these tracepoints are also included in PostgreSQL, MySQL, Python, NodeJS, Ruby, PHP, and libraries like libc, libpthread, and libvirt.

The static tracepoints can be leveraged by Bitcoin Core users wishing for more insights into their node. Adding USDT support did not require intrusive changes, and no custom tooling had to be written. When not used, the performance impact of the tracepoints is minimal to non-existent. Only privileged processes can hook into the tracepoints, no information leaks to other processes on the host. These properties make Userspace, Statically Defined Tracing a good fit for Bitcoin Core.

For example, I placed two tracepoints in the peer-to-peer message handling code of Bitcoin Core. For each inbound and outbound P2P message, the tracepoints pass information about the peer, the connection, and the message. This data can be filtered and processed by tracing scripts. As a demo, I have built a P2P Monitor that shows the communication between two peers in real-time. Users can find this script alongside other USDT examples in the contrib/tracing/ directory of the Bitcoin Core repository.

This is one of the examples from https://t.co/1QGb7jgsnZ (with added IP masking). pic.twitter.com/E5mREYknEm

I list some use-cases for Userspace, Statically Defined Tracing I have thought about or worked on. With only three tracepoints merged, there is plenty of room for developers to add new tracepoints and get creative with tracing scripts. Issue #20981 contains discussion and ideas for additional tracepoints that can be implemented.

Researchers and developers can use the P2P message tracepoints to monitor P2P network anomalies in real-time. One example could be detecting the recent addr message flooding as reported in this bitcointalk.org post. The messages were announcing random IP addresses not belonging to nodes on the Bitcoin network. The flooding has been covered in detail by Grundmann and Baumstark. They discuss that the attacker could obtain the number of connected peers and learn about other addresses, including Tor addresses, the node is listening on. This would reduce the privacy of the node operator. It’s important to stay vigilant to these attacks, discuss them, and then, if needed, react to them.

Similarly, I have been instrumenting the Bitcoin Core network address manager with tracepoints. The addrman keeps track of gossiped network addresses for potential outbound peers connections a node makes. It’s designed to be resiliant against Eclipse Attacks, where a node only has connections to peers controlled by the attacker. The attacker can choose which information to feed to the node, enabling, for example, double-spending attacks. Information about the addresses in the addrman might help detect the build-up of an eclipse attack when combined with other data.

Additionally, these addrman tracepoints can be helpful during debugging and code review. To showcase this, I build a tool that visualizes the addresses in the addrman data structure based on the data submitted to the tracepoints.

Quiz: Which Bitcoin Core data-structure does this visualization show? pic.twitter.com/U6cnHBFWWT

A Prometheus metric exporter can also build on top of the tracepoints without requiring additional code in Bitcoin Core. There already exist RPC-based Prometheus exporters and projects like Statoshi. However, RPC-based exporters are limited by the information exposed via the RPC interface, and Statoshi is large a patch-set that requires maintenance on each Bitcoin Core release. I have published an experimental USDT-based exporter called bitcoind-observer that hooks into the three currently merged tracepoints and serves metrics in the Prometheus format. The exporter can be used by everyone currently running a Bitcoin Core node compiled with USDT support. A demo is available on bitcoind.observer. I’ve recently used this to benchmark the bandwidth usage of an implementation of Erlay: Bandwidth-Efficient Transaction Relay for Bitcoin. Initial results can be found here.

The already existing tracepoint validation:block_connected can be used to benchmarking block validation. This allows, for example, to compare the initial block download performance between different patches and can aid in detecting performance improvements and regressions. For example, the bitcoinperf project might benefit from such tracepoints. I’ve used the tracepoint to benchmark Martin Ankerls pull request #22702. If merged, the changes he proposes would result in a substantial block validation speed up and reduction in memory usage.

I will collect further ideas for tracepoints and implement them alongside example tracing scripts and more tooling. This will also involve communicating with other Bitcoin and Bitcoin Core developers about which tracepoints could be helpful in their projects. An example is Antoine Riard’s cross-layer anomaly detection watchdog which he initially proposed as a new, internal module to Bitcoin Core. However, many of the required events and metrics can be collected by hooking into tracepoints. This means the watchdog could be an external runtime, which would speed up the watchdog development and requires less code and maintenance on the Bitcoin Core side.

If everything goes according to plan, the v23.0 release of Bitcoin Core, expected in early 2022, will include the first set of tracepoints. A goal is to enable USDT support in release builds by default, which still needs some work. Additionally, the tracepoint API should be semi-stable and thus needs testing.

In short: I have been adding tracepoints to Bitcoin Core that users can hook into to get insights into the internal state. The tracepoints are based on Linux kernel technology and do not require intrusive changes or custom tooling. The groundwork is done. Now further tracepoints can be added, and tooling can be written.

All text and images in this work are licensed under a Creative Commons Attribution-ShareAlike 4.0 International License 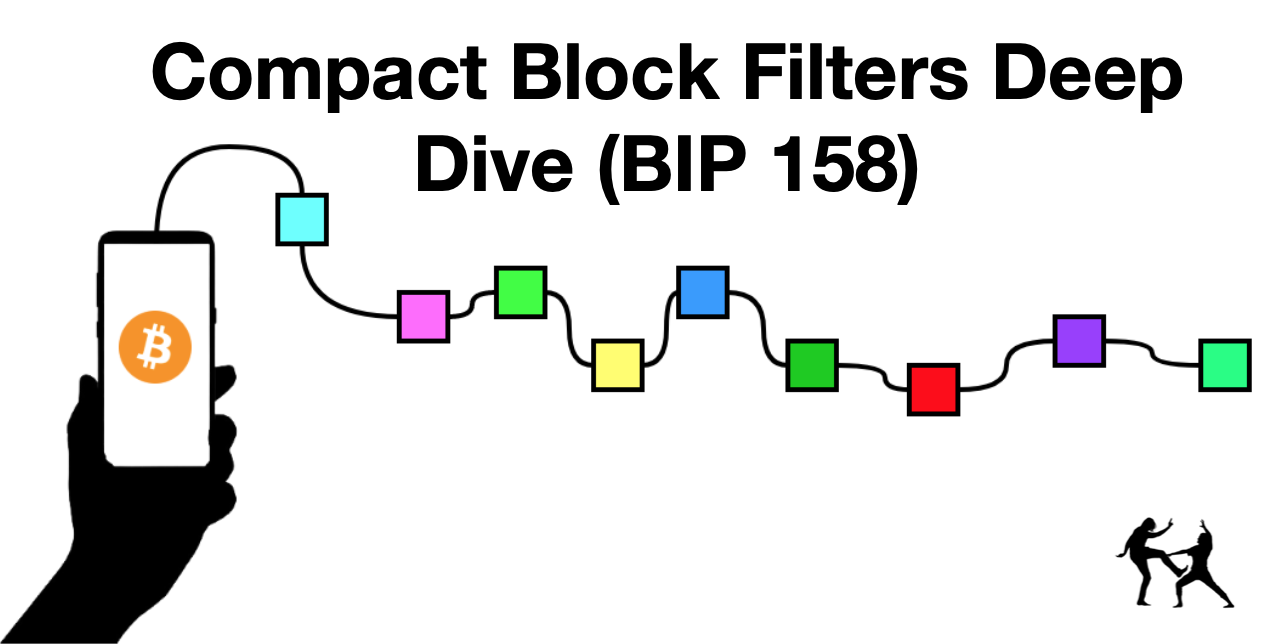 In this post, I will briefly describe the needs of a bitcoin light client and why compact block filters satisfy these needs better than Bloom filters do. Then I will dive into exactly how compact block filters work and will follow this with a step-by-step guide for constructing such a filter from a …